“Le Rocher”, the only newspaper in French in the Channel Islands

Since 2016, Maison de la Normandie et de la Manche oversees the publication of the quarterly “Le Rocher”, the only French-language newspaper in the Channel Islands.

The revival of a newspaper in French
“What are the French media in Jersey? When this question was asked in October 2015 during the XXVIII Regional Assembly of the Assemblée Parlementaire de La Francophonie, French-language newspapers in the Channel Islands had, long ago, disappeared in favor of the English-language press. Maison de la Normandie et de la Manche, under the impetus of then director Xavier Souris, decided (with the help of passionate volunteers) to offer the French community of Jersey and the Francophonie, a voice.  In 2016, a partnership was made with the English-language newspaper Jersey Evening Post to publish a quaterly neswpaper in French, as an insert within the JEP. In 2018, the Guernsey Press joined the project and Le Rocher is now published in both Bailiwicks!

A collaborative project
Thanks to the work of a passionate team of  contributors (all volunteers) from Jersey, Guernsey, Alderney & Sark, each publication presents between twenty-five and thirty articles on various topics (culture, education, history, sports, languages, twinnings …). Le Rocher is a unifying newspaper that particularly celebrates the links between insular and continental Normandy with articles about Norman languages ​​or information on cooperation. Publishing costs are paid through advertising inserts from Anglo-Norman companies and institutions engaged with the French-speaking island community.

Nearly 30,000 copies are distributed every quarter, on the islands, via the two local newspapers and digital versions are available!

Many thanks to our sponsors, especially : Alliance Française de Jersey, Bruno’s Bakery & all the companies helping us ! Without your precious help, we would not be able to publish our Newspaper!

Many thanks to the Jersey Evening Post & the Guernsey Press for allowing Le Rocher to be published within their newspapers. 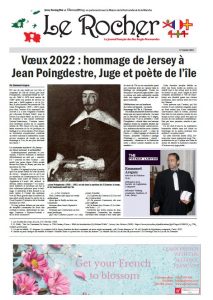 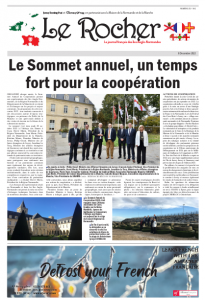